Interstate 75 W is a Pico W-based driver board for HUB75-style LED matrices. It's designed to plug neatly into the back of a LED panel, and provides a quick and easy way to whip up some scrolling signage or an eye-catching LED display for sensor outputs. Because it has a Raspberry Pi Pico W aboard you can also use it to display information from the internet! 🌎

I75 W is powered from the Pico W's micro-USB port, which should also be able to power a few connected panels happily, assuming you're not planning anything too eye-bleedingly bright. There's also two useful buttons, a reset button and an onboard RGB LED.

We've also popped a QW/ST connector on there, to make it super easy to plug in Qwiic or STEMMA QT breakouts.

Here are some things you could do!

🚌 Tap into an API and display bus times, plane tracking or traffic info.

💾 Scroll greetz to your crew, just like in the old days:

Our C++/MicroPython libraries include support for Interstate 75 W. You'll get best performance using C++, but if you're a beginner we'd recommend using our batteries included MicroPython build for ease of getting started. Our HUB75 module lets you draw individual pixels to your matrices and uses RP2040's PIO state machines and DMA to minimise CPU usage and maximise luscious, 10-bit gamma corrected colour depth.

Alternatively, you can draw on your LED matrices using our lightweight PicoGraphics library, which includes convenient functions for displaying text and shapes, and we've provided some examples to get you started. Note that if you're chaining panels, PicoGraphics only currently supports these specific arrangements of matrix panels (WxH):

The Qw/ST connector on Interstate 75 W makes it super easy to connect up Qwiic or STEMMA QT breakouts. If your breakout has a QW/ST connector on board, you can plug it straight in with a JST-SH to JST-SH cable. 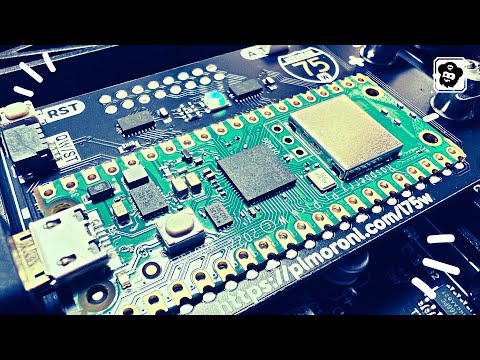